Ole Harvery is a stubborn and vexing system.   I like the caveat “In any case, it will cause heavy rain”.   Captain Obious has that right. lol.    The heavy rain-maker is a given anyhow.    Oddly enough there has been some Anti-Cyclonic in the Central Gulf of Mexico.

With some of that cloudiness disappearing and convection being to fire up, it is something to be mindful of. Harvey will experience some drag over the Yucatan Peninsula.   It’s strength and trajectory in the next 1-2 days will affect this sys

I am still leaning towards a strong Tropical Wave or System (depression)  Maybe  it needs an SSRI. Smh.

Disturbance two will form over Florida and most of that will veer away causing only winds, rains and high surf. 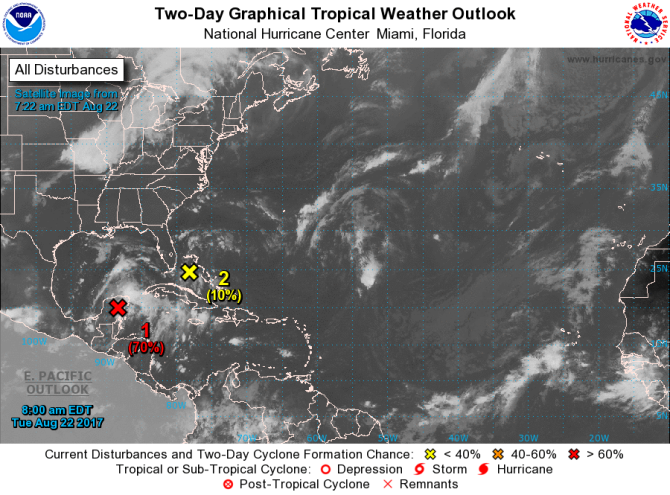 For the North Atlantic…Caribbean Sea and the Gulf of Mexico:

1. Disorganized showers and thunderstorms over the Yucatan Peninsula
and adjacent water areas are associated with the remnants of Harvey.
Environmental conditions are expected to be conducive for
development when the system moves over the Bay of Campeche tonight,
and a tropical depression is expected to form over the southwestern
Gulf of Mexico on Wednesday or Thursday. Regardless of development,
locally heavy rainfall and gusty winds are expected to spread
westward across Belize and the Yucatan Peninsula during the next day
or so. Interests in northeastern Mexico and along the Texas coast
should monitor the progress of this system.
* Formation chance through 48 hours…high…70 percent.
* Formation chance through 5 days…high…90 percent.

2. Shower and thunderstorm activity associated with a broad trough of
low pressure near the northwestern Bahamas remains limited. Any
development of this system during the next few days should be slow
to occur while it moves west-northwestward, and then turns
northwestward or northward near Florida and the adjacent waters.
Environmental conditions could become a little more conducive for
development by the weekend when the system begins to move
northeastward over the western Atlantic.
* Formation chance through 48 hours…low…10 percent.
* Formation chance through 5 days…low…30 percent.

Some of this energy above will result in more thunderstorms and some WILL be severe.

The bottom-most map over the Southwest shows mixing. The biggest of which will naturally occur near the coastline, where land and sea (mix). When this mixing happens in tandem with forcing,  you have more available moisture and lift.