The Yucatan Peninsula is where Tropical Storm Harvey  will first encounter land.   And  as it does it will weaken.  It is only a bland tropical system as is.  Any interaction with land will weaken it, but trajectory is a huge issue.  Crossing the Peninsula diagonally is best for everyone but those who see significant swells, a few winds and perhap torrential rains.  I am not saying that it is good news for Southern Texas to Lake Carles, LA. 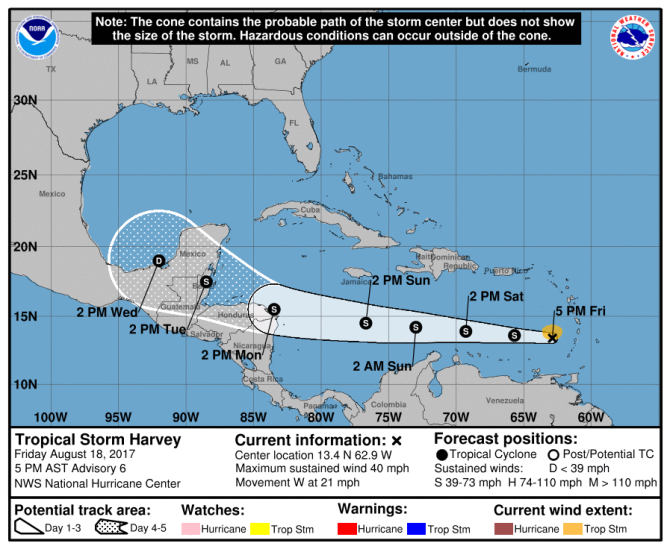 As the 5PM REPORT Came out,  the diagonal path seems to write a different story from above.  There are two considerations.  The strength and its path.   I think perhaps the question is that the system is still only a rather weak TS and any encounter with land may cause it to weaken even further

Strongly feel that this storm may be downgraded and stay a Tropical Depression.  If it does reach TS again,  then something atypical would happening.  Apart from that, little change is expected, as per me.

Again, there has been little change in the structure of Harvey,
with the low-level center near the eastern edge of a strong, but
poorly organized, convective area. Earlier reports from an Air
Force Reserve Hurricane Hunter aircraft included winds suggesting
an increased intensity. However, due to uncertainties in how
representative these measurements were, no appreciable change in
the central pressure, and no improvement in the structure, the
initial intensity is held at 35 kt.

The initial motion is 275/18. A strong low- to mid-level ridge
north of the cyclone should keep Harvey on this general motion
for the next 3 days or so, with the system moving from the eastern
to the western Caribbean Sea during this time. After 72 h, a
west-northwestward motion with a decrease in forward speed is
expected when Harvey passes near or over portions of Central
America, the Yucatan Peninsula, and eastern Mexico. The new
forecast track is a little faster then the previous track, but
there were only minor changes in the direction. It should be noted
that there is considerable uncertainty about how far north Harvey
might get over the Bay of Campeche, with several of the large-scale
models not bringing the center back over the water on the latest
runs.

The current shear should persist for about the next 48 h, and
thus the intensity forecast continues the trend of slow
strengthening during this time. However, the GFS and ECMWF again
forecast Harvey to degenerate to an open wave during this time, and
the rest of the intensity guidance has trended toward a weaker
cyclone. This lowers the confidence in intensification. After
48 h, conditions appear more favorable for strengthening, with the
main uncertainty being how much land Harvey will encounter. The
intensity forecast will again call for a peak intensity of 60 kt in
72 h, followed by weakening due to land interaction.

WATCHES AND WARNINGS
——————–
There are no coastal watches or warnings in effect.

Interests in the Caribbean Sea and the adjacent land areas of
eastern Central American and northern South America should monitor
the progress of Harvey.

DISCUSSION AND 48-HOUR OUTLOOK
——————————
At 500 PM AST (2100 UTC), the center of Tropical Storm Harvey was
located near latitude 13.4 North, longitude 62.9 West. Harvey is
moving toward the west near 21 mph (33 km/h) and this general motion
is expected to continue for the next couple of days. On the
forecast track, the center of Harvey will move through the eastern
Caribbean Sea tonight and through the central Caribbean Sea
Saturday and Saturday night.

Maximum sustained winds are near 40 mph (65 km/h) with higher gusts.
Slow strengthening is forecast during the next 48 hours.

Tropical-storm-force winds extend outward up to 70 miles (110 km)
mainly to the north of the center.

THERE ARE NO COASTAL WATCHES OR WARNINGS IN EFFECT.

INTERESTS IN THE CARIBBEAN SEA AND THE ADJACENT LAND AREAS OF
EASTERN CENTRAL AMERICAN AND NORTHERN SOUTH AMERICA SHOULD MONITOR
THE PROGRESS OF HARVEY.

PRESENT MOVEMENT TOWARD THE WEST OR 275 DEGREES AT 18 KT

EXTENDED OUTLOOK. NOTE…ERRORS FOR TRACK HAVE AVERAGED NEAR 150 NM
ON DAY 4 AND 200 NM ON DAY 5…AND FOR INTENSITY NEAR 15 KT EACH DAY

This satellite picture depicts an irregular storm center on the IR Loop.  It could better organize and center seems kind of oblique looking. 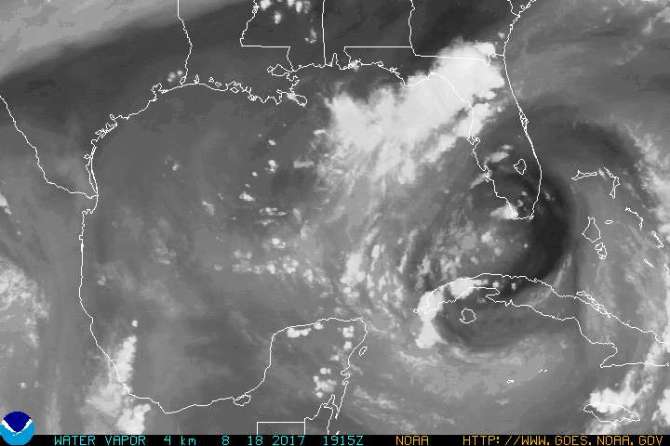 This chart shows a lot of instability and a few showers and thunderstorms.   Pretty good indicator of enhanced convective activity.  I am not so certain of the forecast path and even a strong circulation.    Right now it is diffuse.  The next few hours may give a few answers.