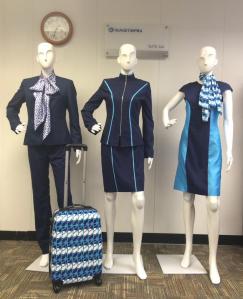 Above right was our actual crew on flight 666.

I used to remember the long boring flights across the pond and across parts of the U.S.   Airline periodicals (some of those do not exist – Allegheny Airlines, e.g.) were really intense.   Reading copious amounts of airline propaganda and smelling the sweet ambiance of restrooms,  was always a highlight.

I remember when the back two rows were not the only coach seats and where DC -9s and 727s hauled most of the freight.  Still I did  ride a pond jumper into Memphis,  complete lightning strikes,  hail and wind sheer.  The best part of those flights was probably the propeller engines grinding to a stop and the jerking noise made as the wheels grazed the runway and the nose came gliding down.

Also those stewardesses (mostly at the time) won awesome little hats,  serving Gingerale,  stale peanuts and movie reviews on an aircraft with no headsets but plenty of antiquated gas masks.   Still, it wasn’t all bad.  Gone are the days when security personnel didn’t molest octogenarians and three year olds.    A time in which OJs biggest hurdles were football players and suitcases.

But back to that reading fare.   Back then no one was telling you that there will extra charges for additional luggage and one butt bought one seat.    I keep forgetting the reading part.   Anyhow,  before LOL and ROFL we had old magazines that must have been out of date,  even for a doctor’s office.   Periodicals which FDR’s third term and how one day air travel might actually transport people across the country and even the world.

In day when a non-stop flight was done along with crop dusting and mail deliveries.   Could you imagine what they must have read back then?  Or the stewardess (mostly) saying, “oh crap’ had a totally different meaning.   So if you see hieroglyphics and the Original 10-15 Commandments consider yourself lucky.  It could have been worse,  you might have had to watch ‘Annie Hall’ and her polymorphous sexual expressions.   Still trying to find those.   That Woody!!!!

3 thoughts on “Before Kindle. Airline Bestsellers.”