Okay before we get started here children let me clarify a few things.    I am liberal in the sense that people come first.   If this means Unemployment Insurance,  food stamps and a reform to our judicial system in regards to imprisonment make me a RHINO than so be it.   But to be honest with you my friends I do not believe in Mickey Mouse.    Mickey speaks the Queen’s English.   Mickey says and does what is he feels will please the Queen.

Let me be frank,  I know for example that John Cena and the rest of the steroid bunch are essentially actors.    I give John a break since he does do a lot in the community and there is a possibility he might not do steroids.    But I always root for the bad guys.   The dopey idol acolytes actually believe most of it,  though they say they don’t.

Now we can include politics in this.  I believe in my fellow man and trust me,  I do know what suffering is about.   I do know what it feels to be in line awaiting a free meal.   I know what it is like to see a veteran shamed for being there.    As a veteran myself I wanted to beat down that Durham Police Officer for acting like a man,  looking like a man and putting down another Veteran because he was standing in the middle of the aisle.   Her countenance was total bullshit.   I hope she runs this scam against a hostile thug who gets her.

Any person can be poor and it is sad that they think they actually deserved to be rich or otherwise privilege.  They would be the first to say they pulled themselves up by their bootstraps.   They teach those wannabe veterans that they inherently superior to even the most decadent drug user.   The only difference is this they have police colors in lieu of jailhouse orange jumpsuits.

What???   She don’t look like a crackhead to me!   And who really does, right?  So maybe this superstar baseball player can be one of those unwashed miscreants?  Oh yeah they are not as good as you are,  really?     Dwight ‘Doc’ Gooden  shown below.   Are you better than he is?  NO!!!   You just think you are. 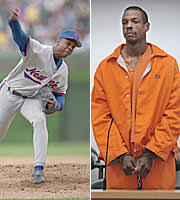 I watch these shows on Cops,  Jail.  etc and I applaud when the police version of the crackhead goes rogue.    It could be them and then it is.   What ever happened to protect and serve?  The LEO should be saying,   yes sir and no sir,  until the client is actually impeding justice and this doesn’t include soccer moms who ran a red light.    This is why these so-called LEOs are put into protective custody.    FYI,  Most there to protect and serve and for those who abuse we will judge you more harshly  if you put your need to someone’s head.   A person who is already down.   Do you do that to your wives?

I am a Vietnam-era.   You non-vet police officers have nothing on me.   You can take down a 95 lb housewife but I am going to put you in your place.   You may put me in my place at the time but I will make sure that Corcoran will be your future.    Check your  packages gentlemen.

Now those of you who bust good officers chops,   you get what you deserve and if you hurt an LEO you are fair game.      You hurt an innocent and all bets are off.    Donating 5 dollars to some Sheriff’s Association,  does not give you a pass?   Are we clear.  I am sure Wally cheating at shuffleboard is important to you but it is not to me and it certainly not to an LEO with a family to feed.  He is one of us in that case.

Now for you liberals.   Many of you are panty-waste.   You are the ones who got kicked out of basic and think you are veteran.   You’re not.   Even pond scum have a higher place in the food chain.   For any of you that abuse a woman or child just shut up.

But rubbing two nickels together and throw them into a wishing well does not make you a community activist.    Like the blacks in Chicago that excoriated this administration the real proof is in outcomes.  And gang-members screw yourself because your holding us all back.   White,  black,  Asian and Spanish-speaking.

I am picking on liberals here because many only pay lipservice.   They elect based on skin color and then deny toxic leaders that take your more basic freedoms away.  I’ve said this before and I will say it again.   We are equal in God’s sight no matter who you pay homage to.

One thought on “Why do liberals think they know it all?”