Hollywood is at fault for much of what plagues women in this country.  In the movie Dazed and Confused,  Matthew McConaughey plays a partying fool who hangs around a pool hall where young teenaged girls hang out.   As he eyeballs a young girl going by he mentions he gets older but the girls don’t.    It is not hard to extrapolate that.

Those two clips make my point but that is not all.   In the movie Fast Times At Ridgement High,    Phoebe Cates breasts were perfect but that is sad,  because is this what she wanted to be known for?    In Porkys we had underage boys chasing prostitutes.   In ‘Valley Girl’  there is Jo Beth Williams pining for a teenager,   while Wiki-leaks mentions how Valley Girls are promiscuous!   And even if this were necessarily true,  what does make these boys???? 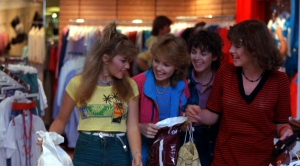 The girl on the left was doing what Valley Girls and he was just some spoiled rich boy,  getting what he can get.   In White Oleander,  the foster-mother told Astrid that she didn’t trust the girl and a man is going to get what he can or something to that effect.    In this scene,  she was taken advantage of.   The media infer that women ask for it and while I was in Tampa and listening to a talk show about a rape in Miami where a woman wearing see through clothes was asking to be raped!   I couldn’t wait to call that out and got hold of Jay Marvin and told him that,  “there is an inherent sexual bias against women and this kind of rhetoric proves it”.

He said I was the first intelligent caller of the night and they may or may not be true but I loathe hypocrisy.  And that definitely was misogynistic to imply women are whores,  sluts, c**** or any of that.    I have to hold myself back from kicking their collective asses.  After suffering a childhood of abuse to my mother by my dad and what I went through,  I am in no mood to sugar-coat this or win points with anyone.    To see a women cower or being cowed makes a red light go off in my head.

At the same time I do not like those who attempt to paint all men as lecherous fools.   A couple of years ago,  Michelle Malkin’s teenage cousin went missing in the Seattle area.   Well NPR thought it was kind of funny considering Malkin’s politics and they actually made fun of the situation.      It was not so funny to liberals when Kennedy had died and remember Kennedy let a young woman drown.    I do not think either situation was humorous in any way.   Where is Marizela Perez?

My point is that this is sad.  Feminist leaders need to step out and decry this because Perez has been missing for almost three years.  I know if a liberal feminist’s daughter were missing this would be a bigger story.   But we are caring humans (I thought) and what happens to a young girl, especially Asian girl is frightening.     Politics has no place in this but I wanted to show when it does and what it does to women.  Perez’s story is very sad and not ‘just’ a story.  Millions of young women around the world are being abused and while ‘abortion’  is very important but women are suffering in third world countries and they are suffering now.   These are not interesting stories,  these are real.   Little girls sold by their parents!!!  And we whine over BS that is merely superficial.

I imagine if we could,   we would storm into those countries and rescue the girls that need hope,  because poverty and perversion has nailed these ladies to a cross of suffering.     Peace on earth?  Goodwill to men?   How about mankind?  Women-kind included? Right?

So today I am reading a blog and the discussion of feminism.  http://www.psychologytoday.com/blog/snow-white-doesnt-live-here-anymore/201208/who-are-the-real-feminists

Who Are The Real Feminists?

If you’d told me thirty years ago that women would be arguing over who counted as a “real feminist,” my response would have been to point and giggle. Until very recently (roughly three hours ago) the “f” word–“feminist”— was considered something a lady shouldn’t say in public.

I’ve had otherwise sane female students, for example, trip all over themselves to avoid using the term: “I’m getting a doctoral fellowship from NASA after I complete my NEA grant but it’s the work I did for girls in Tanzania during my Peace Corps stint that’ll be my legacy, I hope, but gosh, no, I’m no feminist. I like wearing earrings and I hope to get married one day.” They think feminism is all about wearing your hair in braids and yelling slogans blaming men for stuff.

(There are six women in Berkeley still doing this. They’re great, by the way, and I’m grateful to them for getting the whole brouhaha started.)

But for most people—and I’m one of them—feminism is the belief that women are actually human beings.

I assume everybody I meet, men and women alike, are feminists; I give people the benefit of the doubt.

You’re using cutlery to eat your food, you don’t wear T-shirts saying “Men: no shirt, no service; Women: no shirt, free drinks!” and you don’t think women are just a man’s way of making more men? Then, honey, you’re a feminist.

My vision of feminism is sort of like a hip nun’s vision of Catholicism—affirming to all and not guided by rule-books or doctrinal declarations.

Women waste a lot of time trying to judge ourselves fairly and evaluate the worth of our own lives.

It’s the moral and ethical version of trying to catch a glimpse of yourself unawares in a storefront window; it hardly ever works. Current cultural cliches would have us believe today’s woman is either trying on filmy negligees while having the nanny deal with our many offspring or else having our bunions shaved from wearing our hard-working shoes, but that’s not how it works for most of us. Our lives are complicated and no, we’re not Meryl Streep, so the complication isn’t wonderfully charming.

The lives of all adult human beings are messy, awkward, and often so fundamentally odd as to be unspeakable except in the privacy of barrooms or the produce aisle of Whole Foods and women are no exception. Yet we keep thinking we should be; we keeping we are not included in “all adult human beings” but must be separated out into increasingly smaller categories.

Let’s stop that, shall we? There’s important stuff to be done, like living life with joy, living it fully, and making sure the lives of those around us are better, healthier, stronger, and that everybody—everybody—has an equal chance for a life well-lived.

That, sweetheart, is the feminist agenda.

A lot of valid points and I would strongly suggest reading about Taslima Nasreen and what she is doing to fight misogyny against women,  no matter what religions might suggest.   WE CANNOT wait for political bodies to convene,  because some of those hate women and that sickens me.   It sickens me because somewhere a female is suffering while most of sleep narcissistically oblivious to that pain.   This is not about bashing anyone except real perpetrators.